At Comic-Con, we formally announced the long-rumored TRANSFORMERS ongoing series by Mike Costa and the returning Don Figueroa. And spinning out of that book will be two miniseries, one also pretty heavily rumored (LAST STAND OF THE WRECKERS, written and draw by Nick Roche) and BUMBLEBEE, by Zander Cannon and Chee.

The best part of making announcements is finally getting to show artwork that we've been dying to show. I know some or all of these have been seen on some TF sites (and Don's redesigns to the characters already causing controversy), but let's get them all out there, starting with Don's two covers for issue 1 (one of which is a wraparound, colored by James Brown; the other in b&w here just to show off Don's lineart. 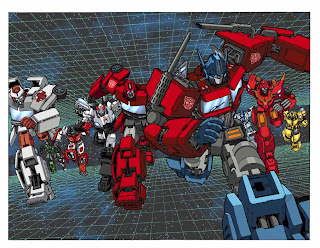 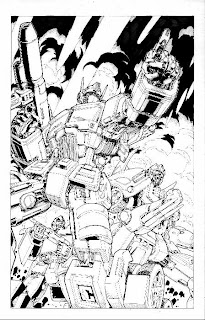 Next is Chee's first cover for the Bumblebee miniseries: 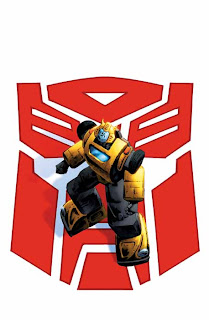 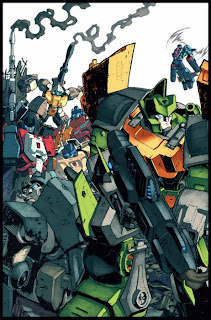 These covers are fricking awesome Ryall! You guys are the slaggin' BOMB man. Oh, and completely off-topic. but me have question - is it still possible to buy TPBs of Zombies vs Robots or World War Robot?

>is it still possible to buy TPBs of Zombies vs Robots or World War Robot?

ZvR should still be available, yeah. World War Robot is sold out but there will be a new edition that collects both volumes of WWR in December.

I love all the art... (especially the Wreckers.) I've been following your TF series from the beginning and have gotten practically every issue.

But I have to protest. I was so shocked and abhorred the first half of AHM #13. Which really shocked me realizing the art was Figueroa (previously my favorite artist). The art makes me think of Skeletor from 80s He-man and believe me... I think he was better looking.

I think it mostly irritates me cause its so... movie-verse looking. If I wanted to read and look at movie-verse art... I would be reading all of the spin-offs of ROTF.

Please rethink using that style. It completely takes away my desire to follow it and will probably be the only thing that will make me completely turn the series off. And I really don't want to do that... because I like supporting you guys. If I were a minority in this thought, I would swallow it... but all of my major TF fans agree with me on this one.

I have to agree with Nightingale. I've been following the series for a while now and have always loved the art work and was dazzled when I would pick up the latest issue. However... All Hail Megatron 13 really turned me off art wise.

I think more will feel the same on this issue and while I want to support you guys (even if you are so cruel to Sunstreaker) but one of the reason I buy the Transformers comics is for the amazing art work. If the art work is not amazing there is no reread value in it for me.

So, please re think the style of the art used for the comics and keep us due hard fans happy.

While I am looking forward to the Wrecker series, I am so so sad to see more of the offensive/ugly designs from AHM:Coda 13 repeated for the new series. If this is what the artwork will look like, and not just cover images, I will stop reading. Part of what drew me to this series were artists like Guido Guidi & Casey Coller. Why you aren't using those artists again is beyond my comprehension.

I will stop reading if I am going to have to endure these pseudo movieverse transformers that resemble skeletons! Why?? I don't understand... Please. Don't let this happen!!

I loved the -ation series when it first came out. I jumped on it, and had my comic book store (that normally doesn't order anything TF-related on his own) order the original -ation series for me.I loved Su's artwork, I loved the story idea, I loved the spotlights as they came out; loved the chance to admire different artists and writers having their work featured in an issue. (Such as Don Figueroa's beautiful work)

The artwork is what really initially drew me into your series. It has been what kept me buying your G1-based series; giving us a fine medium between robotics and just that touch of human found in their face.

That is really my only complaint about this redesign.

It reminds me far too much of the horrendous designs used on the faces of the Transformers in the Avengers/TF crossover story. If that series had gone on much longer, I would have stopped buying it, rather than continue to be subjected to that.

If those first two pictures reflect the interior artwork on these books, I will not at all be inclined to pick any of these up.