In the WEEKLY WORLD NEWS series coming in January, the main character in the mini will actually be Ed Anger, even more than Bat Boy. Ed is the WWN's columnist who sits to the far right of the far right (for example, he thinks the rain forest should be paved). In fact, the series revolves around the guy, since the first miniseries subtitle is "The Irredemption of Ed Anger." (I'm pretty sure "irredemption" will eventually be deemed an actual word and added to the Merriam-Webster Dictionary, after the dictionary people read this series.)

Below are Alan Robinson's original sketch, and the finished version. Ed was modeled just a bit after Clint Eastwood's character in GRAN TORINO. Even though Ed thought the character in that movie was a hippie liberal... 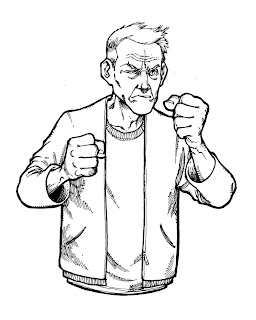 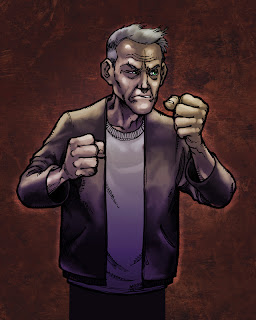