At Comic-Con, we too some people by surprise in mentioning that we were going to be doing comics based on the WEEKLY WORLD NEWS tabloid newspaper characters. I'm going to be writing the series, which debuts in January, and Alan Robinson is handling the art. I thought I'd show a bit of what we've got cooked up so far (as I type this, two scripts are written, two covers each for the first two issues are done, and the first half of issue 1 is drawn, so we've got a good jump on where it's all headed. And where that is is, somewhere far afield of even GROOM LAKE. It'll have a good narrative and tells a solid story, but it does have bits of ridiculousness that top anything I've done so far. Issue 2 is the most fun I've ever had on a script).

Before getting more into that, though, let's lead off with the look of our main character, Bat Boy. In this series, as in the tabloid, he's our Zelig, our Forrest Gump, an innocent who happens to turn up at momentous events. But is he really that innocent? And how does he turn up everywhere like he does? That's what another of the characters, Ed Anger, sets out to find out. More on Ed tomorrow. For now, BAT BOY:

And the final look of the character (art and colors by Alan; this image will make up one part of the final first issue cover, which will emulate the newspaper's look and design. I'll post the first issue covers later this week. One of 'em is a nice Alex Ross swipe... I mean, tribute.): 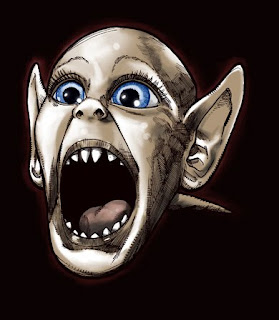 wonderful work there,
so awaiting this series,
hopefully Batboy can continue in some way,

all the best mate,