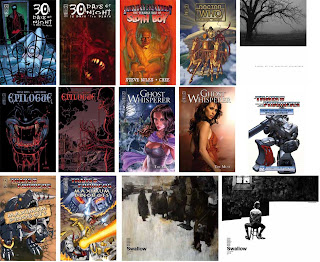 A day later this week: 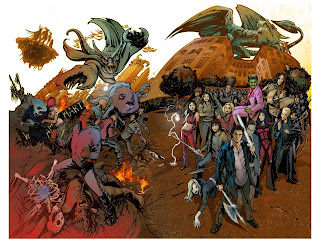 In honor of today's supposedly bleak "Black Friday" post-Thanksgiving shopping outlook, I thought I'd run a scene that seems to reflect what some retailers are expecting to see today. The wraparound cover image is by the one and only Franco Urru, with colors by Fabio Mantovani, the art team on ANGEL 15-17. Franco's original b&w image is included below, too. 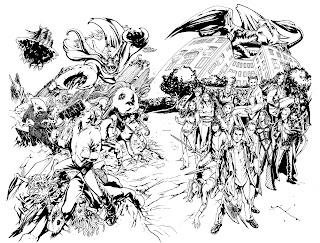 The Wizard of Locke

In the WIZARD magazine being released today, they announce their Best of 2008 pics. And among the winners, they awarded one of our own: 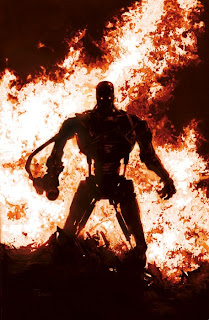 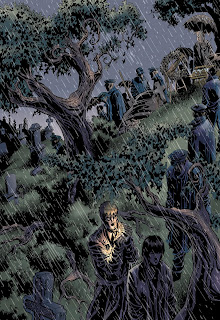 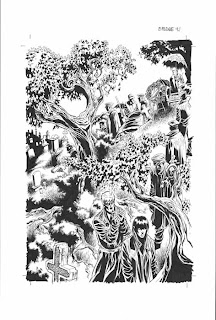 Just received today, a page from EPILOGUE #4 from Kyle Hotz, who clearly hasn't heard that drawing backgrounds in comics is passe ('cuz it's not, kids, don't believe the hype!).
Posted by Chris Ryall at 9:49 PM 2 comments: 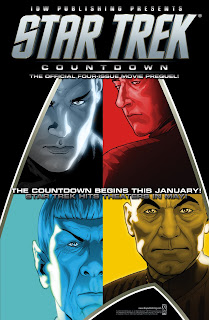 Our STAR TREK: COUNTDOWN prequel to next summer's movie launches in January. Up until now, we've had to keep things under wraps, but today the official press release announcing the 4-part series gets released, along with an image showing the four covers from series artist David Messina. Here are those images, which emulate the movie's teaser posters and form one larger image when combined. The series is plotted and based on a story by Kurtzman & Orci, written by Mike Johnson & Tim Jones and presided over by J.J. Abrams. This'll be the only lead-in story to the movie itself, and it tells a pretty epic story. Based on the 20 minutes of footage of the movie that we saw last week, this'll be quite a story when all is said and done. The first chapter is up for pre-order in the current issue of PREVIEWS.
Posted by Chris Ryall at 6:41 AM 5 comments: 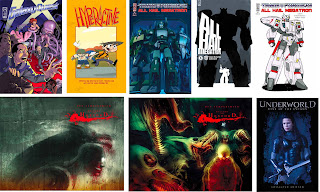 Ben Templesmith--he of soon-to-be-GROOM-LAKE-fame--is also going to do a DOCTOR WHO one-shot (written by Leah Moore & John Reppion) in February. Rather than show finished art this time, I thought I'd share a bit of the creative process in putting together a book like this. These are Ben's initial sketches of the good Doctor and Martha. 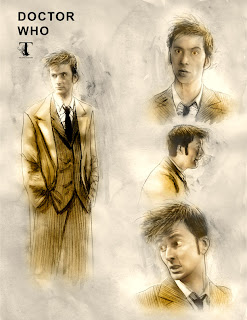 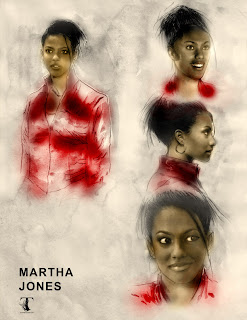 I'm back in town now after a few days back east so while I catch up on lingering work, let me throw a little bit of the wonder of David Messina at you. His cover for ANGEL: SMILE TIME #2 and the image that inspired it. 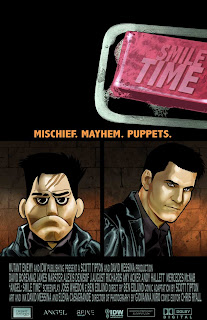 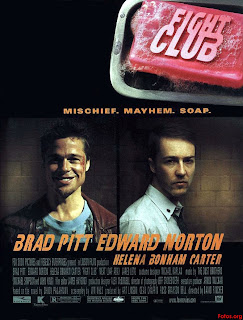 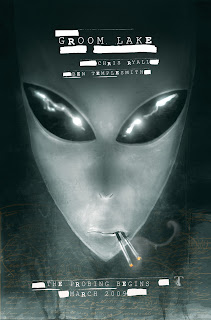 A rare image-less post from me today. Diamond released October sales figures today, and IDW was once again the #4 publisher, our second month in that rarified air.

Clive Barker's The Thief of iTunes 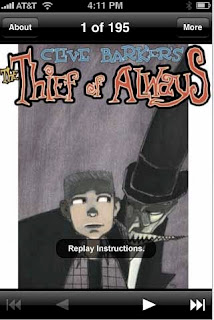 Our first comic downloadable for the iPhone just went live at iTunes: CLIVE BARKER'S THE THIEF OF ALWAYS. Our GHOST WHISPERER comic will be up by tomorrow, too. (I should not that THIEF is a 48-page comic, too, so while most of the comics up at iTunes are giving uou 22 pages for $0.99, you're getting more than double that for the same price with this one. Kind of like downloading "Ina Gadda Da Vida" instead of "Shock Treatment" by the Ramones.

Somehow, I don't think my own adaptation of Clive's work, THE GREAT AND SECRET SHOW, will make it up there. Seems iTunes has some pretty strict content rules and that one doesn't quite seem to fit their bill...
Posted by Chris Ryall at 6:54 PM 4 comments:

Since I'll be out of town for a few days and not so easily able to post images here, I thought I'd get a jump on a couple before getting on the plane. So here's a preview of this week's ANGEL 14, by Brian Lynch, Stephen Mooney and Art Lyon. This is Stephen's final issue since Franco Urru (and new colorist Fabio Mantovani) returns to the fold next month.

Our first-ever 3-D comic comes out this week. While the effect doesn't quite work so well here without the glasses that come with the comic, you can still get a sense of things (especially if you've got a pair of the glasses at home). Effects by 3-D whiz Ray Zone: 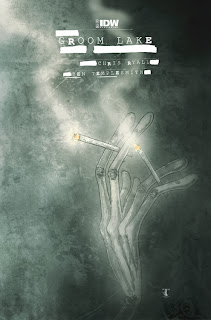 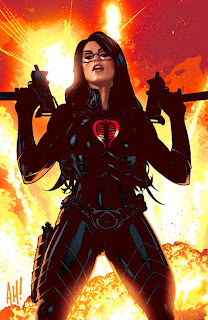 Who's doing the Baroness? Artist Adam Hughes, as seen in this image that's gonna soon be available as a variant cover once our JOE titles launch in earnest in January. This cover somehow seemed a good way to head into the weekend.
Posted by Chris Ryall at 7:45 AM 4 comments: 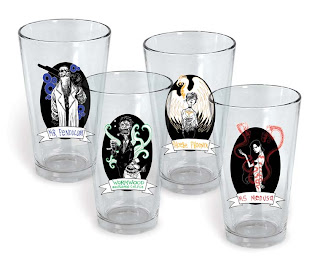 Everyone agrees that Ben Templesmith's WORMWOOD, GENTLEMAN CORPSE reads better after you've had a couple of pints. Or maybe it's that Ben looks better after a couple bitters? I forget. Either way, Wormwood has long professed his love for the dark stuff in the pages of his comic, so we figure it's time to help enable more home-drinking. In January, we're going to offer actual merchandising, which is a bit rare for us (nary a Zippo lighter, shot glass or DOminatrix-brand Real Doll in our catalog right now)--a set of four WORMWOOD pint glasses, each adorned with new art from Ben (the package itself will also feature some new Wormy art).

The Guinness (or Boddington's, if you non-corpse gentlemen prefer blondes) is extra, but at least now you can toss that old paper cup and impress the sig. other in your life. And if they're not impressed at the start, they will be after they've emptied a few of these glasses.

You can even develop some Wormwood drinking games:

And so on...
The glasses are offered in the January issue of Previews, Diamond order code NOV08 4122.
Posted by Chris Ryall at 9:46 AM 2 comments: 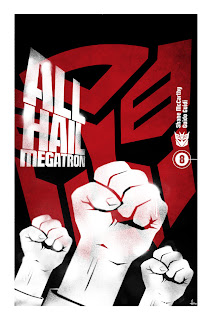 And GHOSTBUSTERS: THE OTHER SIDE #2: 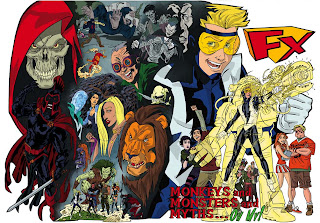 The new FX trade paperback that is released tomorrow--featuring story by Wayne Osborne and art by John Byrne--features an all-new wraparound cover from animator A.J. Jothikumar. The thumbnail below doesn't do the cover justice so here's a look at the entire image.
Posted by Chris Ryall at 8:53 AM 3 comments:

Well, free previews of comics, anyway. We've got a lot of titles coming out this week, some of which are making their debut, so I thought we should show some of them off and let people see what's coming.

Next, the debut issue of THE DREAMER:

Sweet DREAMs (Are Made of This) 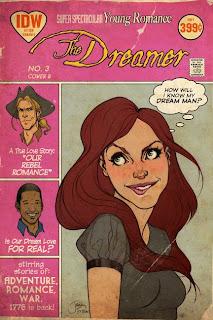 And the cavalcade of '80s song titles continues... this one in reference to artist Jenny Frison's variant cover for THE DREAMER #3. Issue one debuts this week, and the book really is a good, action-filled historical tale with some good romantic bits, too. It's a fun read for girls who might not otherwise read comics, and good for anyone who likes realistic Revolutionary War-era action, too.
Posted by Chris Ryall at 9:55 AM 3 comments: 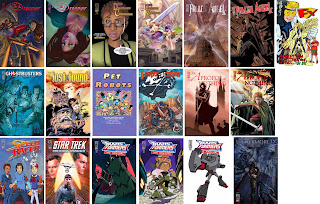 It's a big week this week, with some debuts that run the gamut from being aimed at kids (SPEED RACER TNG, PET ROBOTS) to teens (THE DREAMER, FX) to fans of Peter David's books also looking for a fun Dark Tower parody (SIR APROPOS) to animal/lycan-lovers (PIRAT TALES, UNDERWORLD) and more: 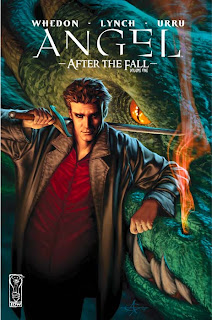 ANGEL: AFTER THE FALL, VOL. 1 made it onto Amazon & PW's 10 Best Graphic Novels of 2008. It was listed as one of the top ten books on Amazon.com's Customers Choice list. A nice, well-deserved honor for Joss, Brian and Franco.
Posted by Chris Ryall at 2:28 PM 4 comments: 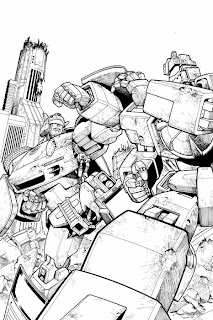 It's rare to be able to show a cover from EJ Su that's just pencils and inks without his colors over them, so while I figured I'd take advantage of having this new piece and show it today. What is it, you ask? There are a couple of the IDW Forum members who are privy to this information, but no one else yet. Whatever it is, it's coming in March '09.
Posted by Chris Ryall at 11:36 AM 20 comments: 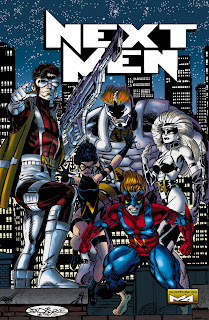 The second volume of our 400-page COMPLEAT JOHN BYRNE'S NEXT MEN books was finalized this week, so it should be out in mid-December. For this one's cover, we got all-new colors from Tom Smith on Byrne's favorite cover from the issues contained within this volume (which features cameos from Mike Mignola's Hellboy, Art Adams' Monkeyman & O'Brien and the Pinis' Elfquest characters, too).
Posted by Chris Ryall at 7:46 AM 3 comments:

A one-shot from Beau Smith and Gary Kwapisz (advance review here), out next Wednesday: 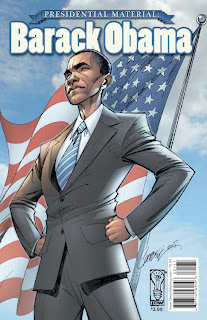 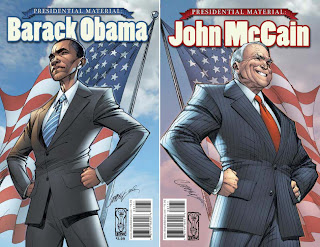 Hef is my ROLE MODEL 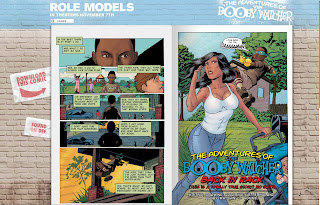 I recently wrote a comic called, uh, "The Adventures of Boobywatcher" (write what you know, as they say) for the movie ROLE MODELS (opening this Friday). It's the story of a kid who watches, well, I think that should be evident. It's a fun little thing "told" by the kid himself, so it was fun to channel a pervy 10-year-old for this (it was easier than it should've been, actually). The comic, a little 8-pager written by me and featuring art by Martheus Wade and colors by Jon Alderink, is up at the movie's site right now, right here.*

So that's now two things form my childhood, reading comics and watching boobs, that have paid off in my adult life...
Posted by Chris Ryall at 5:36 PM 4 comments: