One lives, one dies.

Well, neither one lives, actually--both are already dead. In October, we're doing ANGEL VS FRANKENSTEIN as a one-shot, written, penciled and inked (seems important to mention that to the people who groused about his fine pencilwork in ANGEL: BLOOD AND TRENCHES) by John Byrne and functioning as a de facto sequel to Mary Shelley's novel. So this Frankenstein's monster is based on her story and design, so he won't be green and neck-bolted. Eisner-winning colorist Ronda Pattison is coloring the issue, and some of her first pages just came through. All of them show why she won the award a couple years ago, just as Byrne's linework shows why he's again one of Wizard magazine's Top 10 "Hot Artists" (and you thought it was just because of the way he looks in a Speedo...). 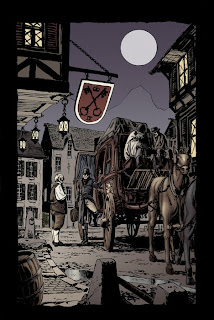 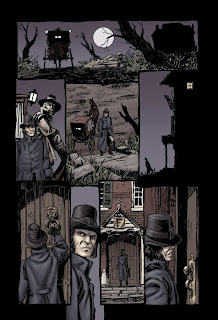 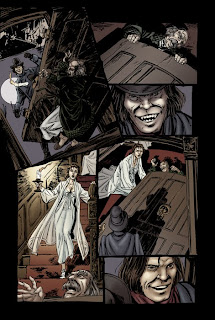 The art here looks rushed. Byrne always grips about comics being "on time" but he has to realize that today's readers are more sophisticated and we want better.

I'll check this out in the store and we'll see...there is a reason Byrne's Angel stuff sells much less than the main mini but i guess his career is one of diminished expectations now.

What are you talking about man? Those pages look great! I am stoked for this story. Blood and Trenches was awesome - and I have no doubt this will be too. Whats with all the Byrne hate?

Will be first in line for this!

Where is it rushed? The pencils and inks look solid, Chad, IMO.

Looks good and I'm always down for a monster bash.

Yeah, I'm with the other folks who replied to you--I don't see that at all. I think the pages look amazing. How can you say something like page 1 with all its detail looks rushed? Well, different opinions, but man, I totally disagree.

This is neither bad nor good, nor in agreement with the Rushed comment, but does anyone else think that Angel is starting to look like Wolverine?

Byrne's work has aged badly. He is wayyy past his prime and cannot turn projects like this around as quickly as he used to.

He has to remember todays comic readers are more sophisticated and he needs to grow roses with his art and not rush out substandard work to meet a deadline.

Who thinks that "Chad" and "Todd M" are the same person:)

You obviously have some grudge against Byrne. You seem to post negative comments everytime a bit of Byrne art is posted.

I wouldnt consider myself an expert - but from the Lorne story, to Blood and Trenches to this - Byrne is doing excellent work for Angel.More Byrne stories please!!!

>Byrne's work has aged badly. He is wayyy past his prime and cannot turn projects like this around as quickly as he used to.

What is your basis for this comment? It's one thing not to like his work--even though you're wrong not to like it, it's still your opinion. But to actually imply that he's not getting work done better and faster than 90% of the creators in this industry--when you don't have any experience working on this end of things to even know how fast he is or isn't--is just uninformed slander.

I never get why the people who don't like Byrne's stuff feel the need to not only slam his work but also his work ethic when you nothing about how he works. Meanwhile, in five years of working directly with artists and writers, I've rarely ever, if ever, worked with someone as diligent, talented and conscientious as John. If you don't like him, fine, don't buy his books, but keep your opinions concentrated on things you know about, not things you don't.

I rather liked Byrne's Assignment: Earth and Angel: Blood and Trenches (which I hope if/when it gets the trade format IDW keeps the paper stock they used for the monthlies).

I have lost some interest in Byrne's work a while ago. Probably because of over exposure. But I have to agree with the others that there is no sign of ruched work or anything int he art shown that could be said to be lacking in professionalism. If you don't like his style then don't buy his work.

But I like Angel and I am a big fan of the original Mary Shelley Frankenstein. So I will be buying this.

I have no cred.. not being a comic book expert and I only buy Angel comics.

But I really liked the visual look of the pencil drawings and the feel of the paper stock.

>Blood and Trenches (which I hope if/when it gets the trade format IDW keeps the paper stock they used for the monthlies).

Yup, it definitely will. The cover's glossier than the comics, since it's a bookstore trade and needed that, but the interior paper stock is the same.

I've only been drawing books for a fraction of Byrne's career, but I do know how long it takes to produce a page of pencils and inks.
Trust me, this stuff aint rushed, not by a longshot.

NOT ONE element of those pages appears "rushed" to me. Those pages should appeal to any allegedly sophisticated comic book fan or an actually sophisticated one. I've very much enjoyed John Byrne's endeavors in the Whedon and Roddenberry sandboxes. Can't wait for Angel Vs. Frankenstein...and more!