In addition to prepping next month's kick-off of our ongoing DOCTOR WHO series, we've been doing a series of one-shots by different creative teams. The August issue, DOCTOR WHO: COLD-BLOODED WAR, is close to being approved to print. The reason I wanted to show it here is, the original writer on the book, the BBC's Gary Russell, had to bow out from the scripting chores (he did hand-pick the issue's artist, however, Adrian Salmon). So Comicraft's Richard Starkings, who has been helping us on WHO above and beyond the call of duty just because he's a fan of the show, was nice enough to step in and write the issue (and letter it, too). Richard was able to pick up Gary's outline and quickly craft a full story behind it, turning it into something different and very fun.

So just for the fact that you don't see many "Writer/Letterer" credits on books, and because Starkings filled the void so seamlessly and capably, here's a look at the issue, which'll be in stores a couple weeks after Comic-Con: 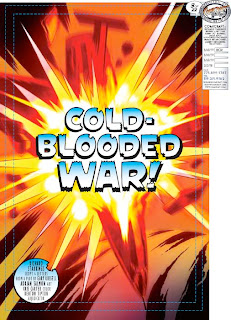 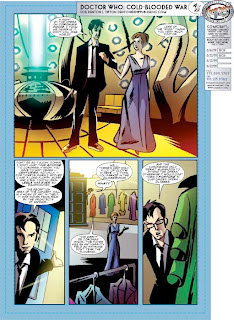 Rich and JG Roshell are truly masters of lettering and design. And they're really nice too. I'm sure Rich does an amazing work in the Doctor series... Favourite character of mine!

Adrian Salmon on art?
About time the bloke got a chance to get a bit more of a "mainstream" exposure.

Wait! I thought Cold-Blooded War was set for August and July's was called "A Room with a deja vu".

"Wait! I thought Cold-Blooded War was set for August and July's was called "A Room with a deja vu"."

Yep, right. I fixed it. The details blur late at night when I'm updating this blog...

Adrian Salmon's art on this issue is Just Beautiful! It was an unexpected pleasure to work with him. Ade's seemingly effortless storytelling and simple linework is amazing -- right up there with Paul Grist.