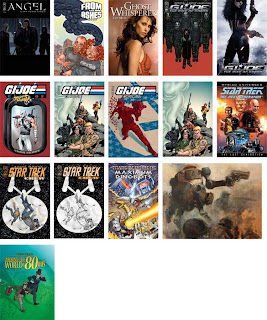 Wasn't the GI Joe Movie Prequel meant to be out this week as well?

I had hoped so, because none of the comic stores in Brisbane got anything other then the Duke issue.

Looks like this is another "Diamond made sure the east coast gets none of this" week.

Midtown's got none of this stuff coming out from IDW this week.

wow Angel #23 out already? awesome! that means the first Drusilla issue is not out till August!

"that means the first Drusilla issue is not out till August!"

August 5, in fact. Unless you're at Comic-Con, where we'll have advance copies for Juliet Landau to sign.