SHOCK to the System 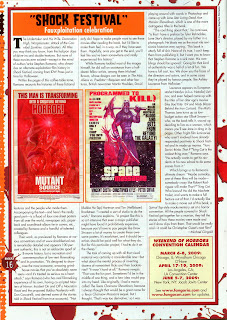 This week's SHOCK FESTIVAL book has been getting some great press from places like FANGORIA (last month's write up is viewable here; the new mag features an even more ravingly ecstatic review).

Also, these places really dig the book, too:

A GREAT cover story in The Austin Chronicle

“A stone groove and as badass a tome as you're likely to come across this year or the next. If you love grindhouse, sleaze cinema, or B-movies in general, you owe it to yourself to pick up a copy.”
--FILM THREAT.COM

"Stephen Romano is the Robert Rodriguez of horror! Not only do I give SHOCK FESTIVAL my highest recommendation, I'm even calling it my favorite book of 2008.”
--COMICS 101.COM

“One of the greatest homage to B-cinema ever undertaken . . . Shock Festival is a breathtakingly thorough overview of over 100 movies and a slew of filmmaker and actors who never existed -- but which you'll believe actually did by the time you finish reading. And your eyes don't even have to touch the words to be convinced, thanks to the down-to-the-smallest-detail perfect collection of posters, newspaper ads, still photos and other visuals Romano and his art team have created. ”
--FANGORIA

“Romano’s pseudo-journalistic endeavor (is) a genuine revelation, an event that’s hardly, if ever, been done: the merging of fact and fiction into something too outrageous to be the truth, and too disarmingly ghastly/gorgeous to be anything but.”
--THE AUSTIN CHRONICLE
Posted by Chris Ryall at 12:26 PM