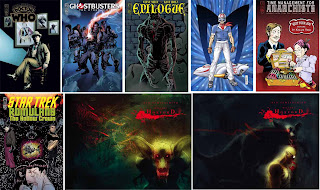 DOCTOR WHO: THE FORGOTTEN #2
EPILOGUE #2
GHOSTBUSTERS: THE OTHER SIDE #1
GRANT MORRISON’S DOCTOR WHO #1
WELCOME TO HOXFORD #3
SPEED RACER, VOL. 6
STAR TREK ROMULANS: THE HOLLOW CROWN #2
TIME MANAGEMENT FOR ANARCHISTS #1
Posted by Chris Ryall at 6:52 PM

TWO Doctor Who comics? Fantastic.
I must just have to get that Morrison stuff, I rather liked his stuff from DWM, and in colour to boot!

But most importantly, Forgotten #2.
Featuring the debut of Sir Alister's "Sonic Screwdriver" :-D (love that preview).

I do like that Seventh Doctor cover... is that the Grant Morrison one?