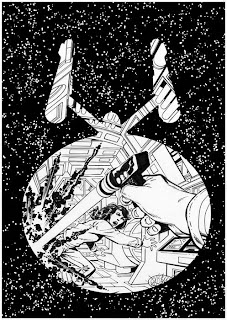 John Byrne sent along his first cover for his upcoming STAR TREK: CREW series (starting in March '09). For those of you who've written in saying you liked his ROMULANS and ASSIGNMENT EARTH books but wanted to see him handle the Federation, this series is for you. The issue one solicits read like this:

Eight years before "The Cage,” the young woman who would become the Starship Enterprise's "most experienced officer" was a lowly cadet assigned to the shakedown cruise of an uncommissioned starship. But that supposedly pedestrian mission may prove the most dangerous of her life.

What about New NextMen? Any news on that department?

you need a colorist for that cover? Wink, wink

"What about New NextMen? Any news on that department?"

Not yet, since he's so busy with this and one other miniseries that launches the same month as this Trek book. But after that, hopefully...