Earlier today, the press release mentioning our upcoming JURASSIC PARK comics made the rounds and included the Frank Miller/Dave Stewart cover that'll adorn issue 1. The text of the release is reprinted below if you haven't seen it (among other details, it talks up Bob Schreck, our Senior Editor who's making his comic-writing debut here, as well as other upcoming variant covers by guys like Arthur Adams (issue 2), Paul Pope (issue 3), Bernie Wrightson, Bill Stout, and Mark Schultz) but I also wanted to show the other cover for issue 1, from artist Tom Yeates and colorist Jamie Grant. Tom's doing covers for issues 1-5, and Jamie's the series colorist. 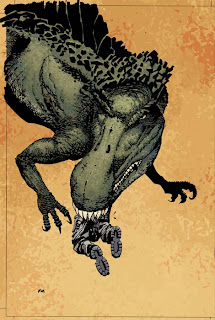 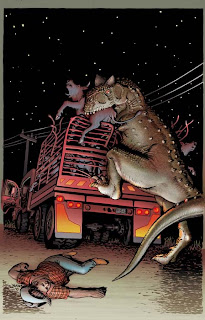 San Diego, CA (March 23, 2010) – IDW Publishing is pleased to announce a publishing agreement with Universal Partnerships & Licensing to create an entirely new series of comics based on the always-popular Jurassic Park franchise. Launching in June, IDW’s Jurassic Park comics will bring all of the oversized action and prehistoric adventure that fans love in a brand-new story. Plus, IDW will also reprint all the original Topps Jurassic Park comics in a trade paperback collection, most of which have never before been reprinted. Fans attending WonderCon 2010, one of the country’s leading comics and pop culture conventions, held April 2nd through the 4th in San Francisco, can get a sneak peak of the new series at the IDW booth #519 and at the Jurassic Park panel on Friday.

“I’ve been a fan of Jurassic Park since we first published it at Topps back in the 90’s, and it’s exciting revisit and reinvigorate the property after all these years,” said IDW chief operating officer, Greg Goldstein. “There’s so much potential for interesting stories, and we have a great team in place to bring them to life.”

Available in both print and digital, IDW’s Jurassic Park comics kick off with a five-issue story arc, written by IDW Senior Editor and comics veteran Bob Schreck. Nate Van Dyke provides interior art, while comics’ legends Tom Yeates and Frank Miller offer their awesome and gory covers to the first issue, with Arthur Adams, Paul Pope, and Bernie Wrightson also providing variant covers for the first storyline. IDW will be giving away a Jurassic Park poster at WonderCon, featuring Frank Miller’s cover art for issue #1. Schreck, Van Dyke and Yeates will also all be on hand throughout the weekend to sign autographs.

“Having been born in the Jurassic Era myself, I just couldn’t pass up this opportunity,” Schreck commented. “I was raised on a strict diet of Willis O’Brien and Ray Harryhausen movies and adore the Jurassic Park films. I can’t begin to convey the thrill of bringing this tale to life with so many old (and new) super-talented friends and fellow dinosaur lovers.”

The first five-issue story arc in IDW’s new Jurassic Park series, Jurassic Park: Redemtion, takes up thirteen years after the very first Jurassic Park motion picture and finds John Hammond’s grandchildren, Tim and Lex Murphy, as well-to-do young adults. While Lex is working with the UN to continue keeping people off of both Isla Nublar and Isla Sorna -- her brother Tim has other ideas about how to get their grandfather’s name back in good standing.

Each issue in the arc will feature a cover by Yeates and a variant by another major artist. For issue #2, fans can expect great things from Arthur Adams, followed by Paul Pope on issue #3, Bernie Wrightson on issue #4 and the hugely popular dinosaur connoisseur Bill Stout on issue #5.

Looks cool. I'd like to see a cover by Richard Corben.

SO is this a series of minis or an ongoing?

So, when do we get a preview of the interior art? :)