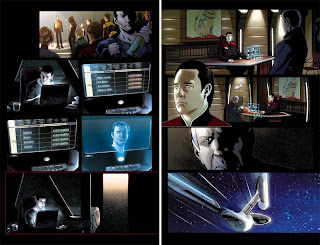 Our STAR TREK movie lead-in comic, COUNTDOWN, began its run on January 14, when issue 1 was released. The first issue got some great reviews from places like AICN and some Trek sites, and now, just under two weeks later, issue 1 -- which was considerably overprinted to make sure there were many more copies beyond what was initially ordered -- is a complete sell-out, too.

Issue 2 is in stores on February 25, and here's a couple pages from that issue just to give those of you who haven't grabbed the first issue a taste of what it looks like. Art and colors courtesy of David Messina.

Update: a live link to the COUNTDOWN #1 review that was mentioned in the blog responses here.
Posted by Chris Ryall at 9:13 AM

Very, very nice. February 25th feels like such a long way off.

Thanks for posting the teasers. Hard core comic fans, like me at TrekWeb, really do appreciate it!

Chris,
I thought you might be interested in our review of issue 1. It's online now at http://handsomegeniusclub.blogspot.com/2009/01/hgc-comic-rack-star-trek-countdown-1.html

ps: The previous week's review was of GI Joe #1.

Nice review, Anthony. You were a bit harder on the movie itself than I think is deserved based on what I've seen, but glad you liked the comic, thanks.