We're spending the weekend at the Transformers convention, BotCon, in Pasadena. And while I let visiting artists Nick Roche, E.J. Su, Alex Milne, Marcelo Matere, Andrew Griffith, Casey Coller, Joana LaFuente, Josh Burcham, Dan Khanna,, and others sketch away without me snapping pictures of them, I did take a few photos of the fan-made figures in the "kit-bash" area. The prize-winners among these will be announced tonight, but among the ones that stood out to me are... 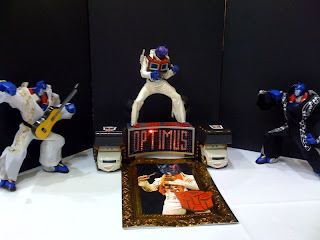 The Drift "paper doll"
Which fully transformers into vehicle mode, too. It was created by Ervin from the Netherlands, the same guy who made a Hearts of Steel Bumblebee figure a couple years back. Really amazing work. 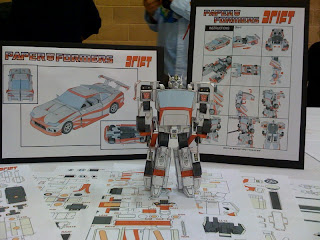 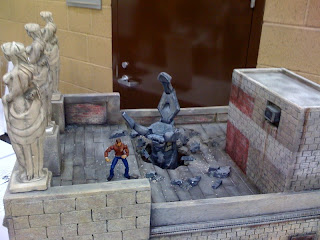 Great show all around. A full sell-out, too, with some 5K people in attendance. Books like our exclusive cover of the Movie Adaptation #1 and the first copies of the children's book, I AM OPTIMUS PRIME, went over really well with the faithful.
Posted by Chris Ryall at 6:00 PM