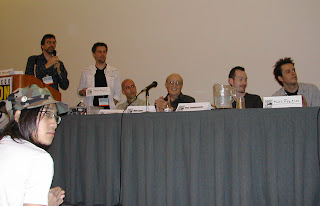 While it's not exactly a glamorous way to spend a fifth anniversary -- home in bed with a fever or some such -- today is my fifth anniversary at IDW. And to commemorate it, I thought I'd run this photo that was taken from my first full week on the job back in 2004, me co-hosting an IDW panel with guests like the great Will Eisner, among others (and the "others" were no slouches, either, folks like Ben Templesmith and Matt Fraction). Eisner's presence immediate made it forever tough to beat on any future panels.
Posted by Chris Ryall at 3:30 PM

Happy 5th mate,and for many more at such a fine publisher,

get well soon as well,

take care mate,
all the best,

Gratz and hope you get better soon!