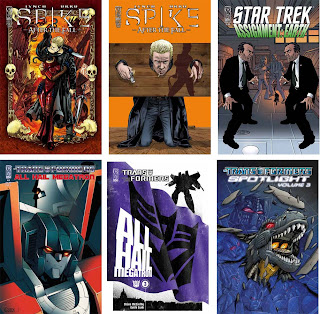 Diamond released the latest industry numbers today, and IDW was officially the fourth-largest publisher in the country now, surpassing Image. So that's a nice way to start the week. Out this week from IDW are these books:

*BEN TEMPLESMITH’S ART OF WORMWOOD SIGNED & NUMBERED SKETCH EDITION was delayed by one week. It was slated for this Wednesday but will now be in stores on September 24.
Posted by Chris Ryall at 10:34 AM

"When one Richard Nixon isn't enough..."

I've loved the Assignment: Earth series, much to my surprise.

Well written, the art is top-notch.
The characters are interesting to boot.


A quick question though: When is Doctor Who: The Forgotten #2 out?
The December solicits are up with the blurb for #5 (ominous sounding blurb it is).

But there's no word on when it, or Spotlight: Sideswipe for that matter, is going to be out.

Now, if this new fame and status should go to your heads, I shall be deeply disappointed.

Keep up the amazing work.


And more Transformer Spotlights would be nice.

(so would Doctor Who Spotlights for that matter)

Sideswipe is out on 10/8, Doctor Who #2 on 10/15. Just got an advance of Sideswipe last week, and it looks amazing. I should post pages here tomorrow.

Fame? Status? No time for either of those things, too busy with making sure these damned monthly trains run on time...

So a couple of weeks.
Cool.

Any specific reason for the delay to DW? I know that there's a lot of (impatient) DW fans who get narky when there's delays and start slagging off IDW for it (to be shouted down by people like myself).

Frankly, it's going to rock.
I know that.
I can wait, it just means I've more money when the time comes to give it all to IDW again :-D

Fans get snarky over everything... but believe me, as soon as the creative on a book is done, we get it out there right away. Some books run a little longer on art, that's all.

And when the art is as good as it has been, when there's so many "winks to the fans" I can wait.

The niggly, snarky buggers can get stuffed IMO.

Keep up teh great work.

What about the errors reported in the Spotlight 3 TPB?