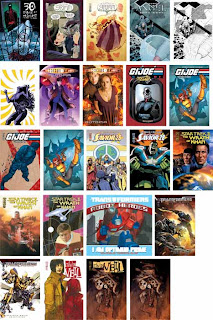 So "hiding a ship deep under water" means the same as "crashlanding in the side of a mountain" in cybertronian...

I'm all for cartoony Transformers, but I'm sorry to say that this is seriously sub-standard fan art. I know smaller companies like IDW can't pay their artists the same wages as the Big Two, but I would prefer a quality over quantity approach.

Wow.
Some people REALLY don't get it.
It's a kids book.
The art is simple, because it's easier for the kid to interpret and to integrate the imagery with the words they are hearing/reading.

As for the Drift insult... have you read Spotlight: Drift? No doubt if you have you're the sort who think it's a rubbish riff on themes used elsewhere. But taken solely in view of the TF universe, it's new and full of new potential ideas.

And it's dreadful that IDW create a new character with the endorsement of Hasbro and then use that character. Because, if they'd have used a pre-existing character in the same storyline they've started with Drift the likes of you'd be complaining that they're "raping your childhood" or some other inane poorly thought-through insult.

For me... Doctor Who this week looks great. I'm wondering how long it'll take before I see
"I am Optimus Prime" in the school library where I work.

Thanks DW...some people just don't get it.

As for me, I am Optimus Prime will be on my sons' shelf shortly. :)
I highly doubt he'll be complaining about the artwork.

And I'll be sure to stress how super cool Drift is so he becomes the biggest Drift fan EVER...hahahahaha...*Drift haters explode with rage* ;)

But seriously, thanks for doing this book Chris. Looks like it'll be a lot of fun.

"I'm all for cartoony Transformers, but I'm sorry to say that this is seriously sub-standard fan art. I know smaller companies like IDW can't pay their artists the same wages as the Big Two, but I would prefer a quality over quantity approach."

For anyone who couldn't quite tell from the preview, this is a comic book/picture book hybrid, a square hardcover book aimed at early readers in the 4-7-year-old range. The art is perfect for this format, and looks just great printed. I love what the Sharps did.

If people react this badly to things like a book that isn't aimed at them, or the use of a character who doesn't even talk in the book, it'll be fun to see the reaction when they see the G.I. Joe picture book and see Snake Eyes' NERF swords...

Instead of just shoehorning him everywhere and just trying to make him more and more special, how about they try to write him well?
That's how Simon Furman managed to make characters like Impactor, Emirate Xaaron and Death's Head so popular. Not by whoring him out like he's Wolverine and shouting at the rooftops that he's getting a toy until Hasbro relents over a year later.

And it's even worse where he's shoved in the children's book as a Hot Rod replacement, whose very tech spec quote was "My actions speak louder than words!".
Seriously.

"And it's even worse where he's shoved in the children's book as a Hot Rod replacement, whose very tech spec quote was "My actions speak louder than words!".
Seriously."

Very anti-fun, aren't you? It's a kid's book. Not canon. Also, it was always ever written as Drift, not Hot Rod, so he replaced no one.

Also, since I assume all of you Anonymous are the same person, if only it were as easy as us screaming to get Hasbro to make a toy.

The book clearly isn't for you. Let's move on.

saying that primus created them... and that the autobots could take the shape of any machine would in the end be lost on the kids because to this point, movie and transformers animated wise... aside from the twins, jetstorm and jetfire, there've only ever been ground-pounder autobots...

so for the sake of simplicity yea... I suppose this does what it needs to do. And the hiding the ship in the water works for the IDW stint with the Ark# whatever, OR for the Animated ship that ended up as omega. The fact that they used the G1 schemes for bot modes, yet more movie-esque vehicle forms just says they're trying to make this as hybrid as they can... I kinda get taken aback by it... but then, hasbro's been known to overextend one minute, and when things don't go how they want, they cut everything and put their eggs in one basket...

i.e. animated is gone, the universe line may as well be on extended hold... so they can try and pump the crap out of the movie line.

And intended or not, he could've just been Hot Rod, who already has a Robot Heroes toy and suchlike.
Or Sunstreaker.


And it could have been for me. I have an infant nephew. I was planning on getting this book from the get-go, so I'd have a little Transformers story to read to him when he's a bit older.
Sadly you had to go and shove that Gambititis-infected character of yours in there.

Who knows. All I'm hoping is that whoever takes over the Ongoing from McCarthy tries to give some merit to Drift, write him well like Furman wrote so many new characters like Impactor and Emirate Xaaron so memorably well. Maybe then I'll start liking him.

But as it is, Drift is all hype no substance.
http://i169.photobucket.com/albums/u226/TheTurnipKing/baddriftshop.jpg

I rather like the idea of a third faction because SHOCK HORROR it hints at something that's never really been touched upon - did everyone on Cybertron factionalise?
What happened if you're not an Autobot or a Decepticon - do you become an "empty" and be cannon fodder for lunatic Decepticons??

So what he has a sword?
It shows that someone has thought about the philosophy of warfare and what might motivate them.

Wasn't it Mizakuni who famously said "It is not that sword that brings death, or the sword that defends life that matters, it is the sword that never need be drawn that we must work towards".

It's an emblem of a philosophy that Drift has adopted. You've just been jaded too much by corny fanwank full of sword totting sub-Dinobots, full of (w)angst and anti-heroism.

Daniel, the Mizakuni quote would've worked as an explanation if it wasn't for the fact that Drift uses his other two swords at the drop of a pin.

Ahh well... yes.
Perhaps the culture he met was Mizakuni, while he was more Sir Hacksalot in his philosophy ;)

I just hope whoever takes over for that supposed "Ongoing" will take some effort to make him an enjoyable character rather than a walking fancharacter cliché (10$ says he was a Seeker when he was Deadlock! :P).

I *bet* that one of the Seekers on the cover of Spotlight: Cliffjumper is called Deadlock :p

FWIW I like Drift. Yeah the whole "never drawing his sword" bit is a little undercut by the fact he gleefully uses another two swords. If the sword was the emblem of his new faction then that'd be interesting IMO (and again linking to that Japanese swordsman I was referring to - I'm sure his name has a "K" in it).