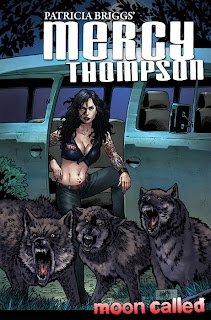 We've partnered with the Dabel Bros. on the next Mercy Thompson graphic novel, MOON CALLED, coming in February. The official press release:

Moon Called is the first Mercy Thompson novel from New York Times bestselling author Patricia Briggs. The novel introduces Mercedes “Mercy” Thompson, a talented Volkswagen mechanic living in Washington State, who also happens to be a “walker,” a magical being with the power to shift into a coyote at will. Moon Called tells of Mercy and the rest of the paranormal cast in the novels, among them werewolves, vampires, gremlins, and more.

Moon Called is also a direct follow-up to the mega-hit Mercy Thompson comic book series Homecoming, published by Dabel Brothers in 2008-2009. Homecoming, the Mercy Thompson graphic novel that serves as a prequel story to Moon Called, debuted at #1 on The New York Times Bestseller List for Hardcover Graphic Books, and is fourth on Amazon’s bestselling graphic novel list for 2009.

“Moon Called is chock full of great stuff and perfect for the supernatural fanatic who just can't get enough of their creepy beasties in their reading diet!” said IDW’s new senior editor, Bob Schreck.

Mercy Thompson: Moon Called is being written by Derek Ruiz, with art by Clint Hilinski. The first of the four-issue series will be available in February 2010 from IDW, with subsequent issues shipping on a monthly basis thereafter. The graphic novel is scheduled to be published in August 2010 by IDW, and will be distributed by Diamond Books Distributor.

Briggs has written four Mercy Thompson novels to date, the last of which, Bone Crossed, debuted at #3 on the New York Times Fiction Bestseller List, and remained on for weeks after. The next Mercy Thompson novel, Silver Borne, is scheduled for publication in March 2010.

“We’re thrilled to be working with IDW on this project,” says Vice President Les Dabel. “Their track record speaks for itself, and we really feel they’ve been making a lot of smart moves within the industry the last couple years.”

Any chance of IDW partenering with Dabel Brothers on other projects like the Dresden Files comics ???